Understanding Quantum Superposition
Or why a quantum apple can be red and green at the same time.

This article is the first of a three part series dedicated to understanding the wonderful quantum phenomenum that is quantum teleportation.

Well in order to understand how quantum teleportation works, we need to have some basic knowledge of quantum behavior, that is, the (completely counter-intuitive) behavior taken by particles the size of atoms, or less.

More generally, what we call quantum mechanics is a fancy word for "behavior of matter and light at the atomic scale". And at this scale, all behaviors are counter-intuitive: an electron is not wave, nor a particle, nor a cloud, nor a soccer ball, nor like any other object we are used to seeing in our everyday lives. Historically, when the electron was discovered in 1897 by the British physicist J. J. Thomson and his colleagues John S. Townsend and H. A. Wilson, everybody first thought that it was a particle, like a grain of sand or a bullet. Then it was shown that most of the time it was more of a wave than a particle. In the end now we say that it's neither the first nor the second. It's an electron. Period.

Between 1900 and 1925, quantum behavior has produced chaos and confusion in the scientific community, because nobody had a clue about what the hell was happening. And we shouldn't blame them, you'll see too that the quantum world never does what you expect it to do. Fortunately, everything became clearer in 1926 and 1927 after Schrödinger, Heisenberg (not the same guy as in Breaking Bad), and Born provided us with a consistent description of matter at the atomic scale.

In this first part, we'll take a look at one of the founding stone of quantum mechanics: the wave-particle duality. It's something that cannot be explained by our intuition of everyday life and there's still no explanation whatsoever about the origin of this phenomenon. We just don't understand why it works that way, but it's OK, we carry on. And that's actually one of the greatest advice that I can give relating to quantum mechanics: Just deal with it!

An experiment with bullets

In order to understand why an electron can be many things at the same time, let's take the same approach as Richard P. Feynman, whose explanation has now become widely used to illustrate the phenomenon of wave-particle duality. Let's do a thought experiment (meaning, you don't actually do it, because it involves canons and bullets and that's dangerous!). The experiment is shown below (the view is from above): 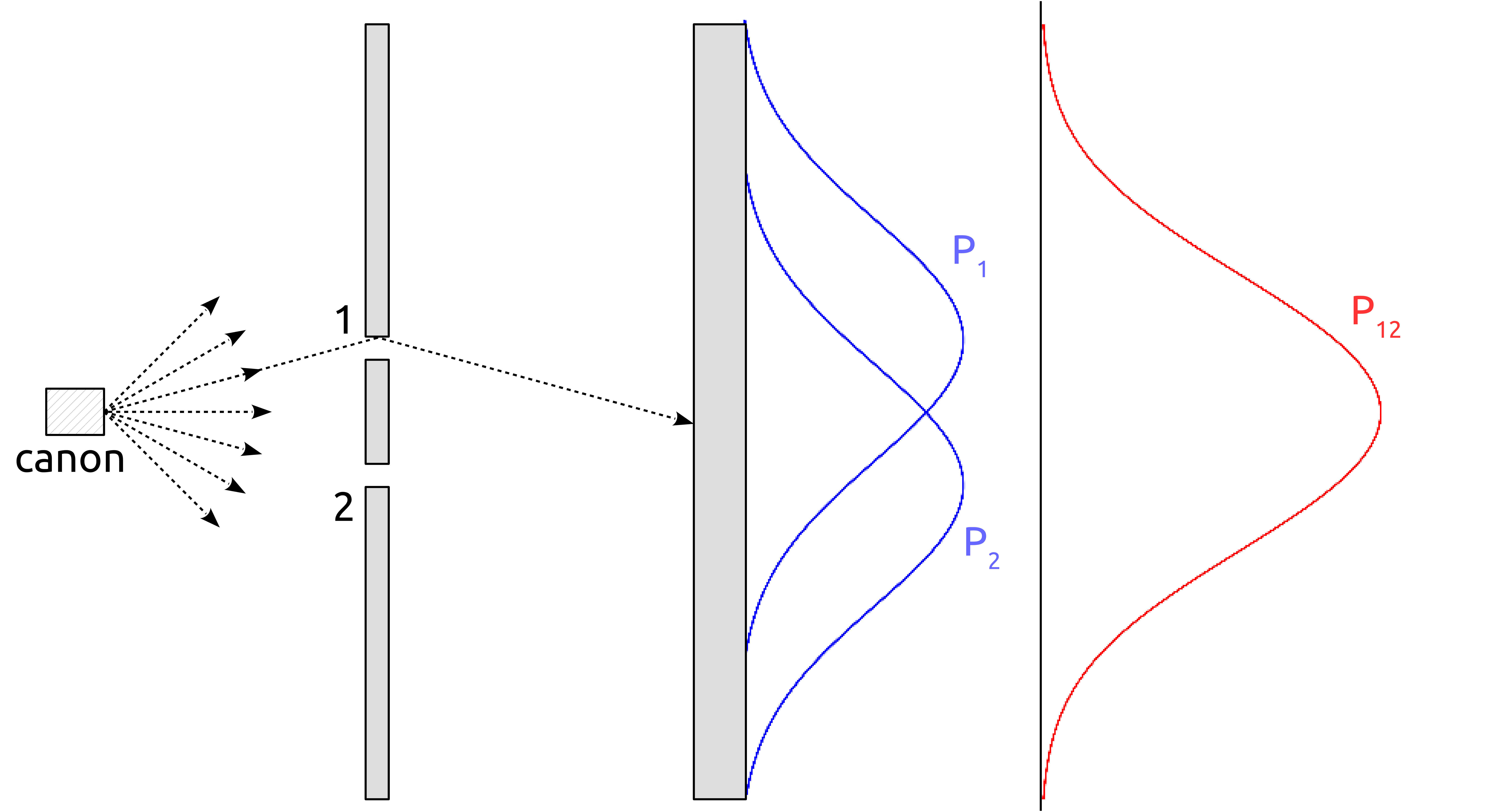 Imagine we have a canon that throws bullets in random directions. Right in front of the canon, we put a wall with two holes inside (1 and 2 on the schematics). These holes are just large enough to allow for one bullet at the same time. Behind the first wall, we put a second stopping wall, on which every single bullet will end up. At the end of the experiment we just count the bullets on the stopping wall in order to assess the repartition of all the bullets on the wall.

First, let's open both holes 1 and 2 and shoot a ton of bullets. These bullets will go through both holes (but remember, one bullet at a time) and end up on the stopping wall. At the end of the shooting, if we count the number of bullets on the stopping wall, we'll notice that most of the bullets are in the center of the wall, and the farther we go from the center, the fewer bullets there will be. Very far from the center we can still have some bullets because they might have been able to bounce on the side of the two holes and end up in places far from the center. But let's agree that this bouncing-on-the-side-of-the-holes is rather unlikely, compared to the go-straight-into-the-wall scenario. That's why we have a lot of bullets in the center, and fewer of them far from the center.

Therefore, when both holes are open, the distribution of bullets on the stopping wall is represented by the $P_{12}$ curve: a large amount of bullets at the center and fewer of them on the borders.

At this point, everything is very intuitive. If we were to perform this experiment, we wouldn't be surprised of these results. There's something worth noticing though:

An experiment with waves

We are going to perform the exact same thought experiment with waves instead of bullets, though it's less of a thought experiment since it's way easier to perform. Instead of a canon that throws bullets, imagine that we have a tap that's trinkling in a tub filled with water. As every drop of water falls into the tub, it creates a concentric wave that propagates in all directions. The experiment is shown below (again, the view is from above): 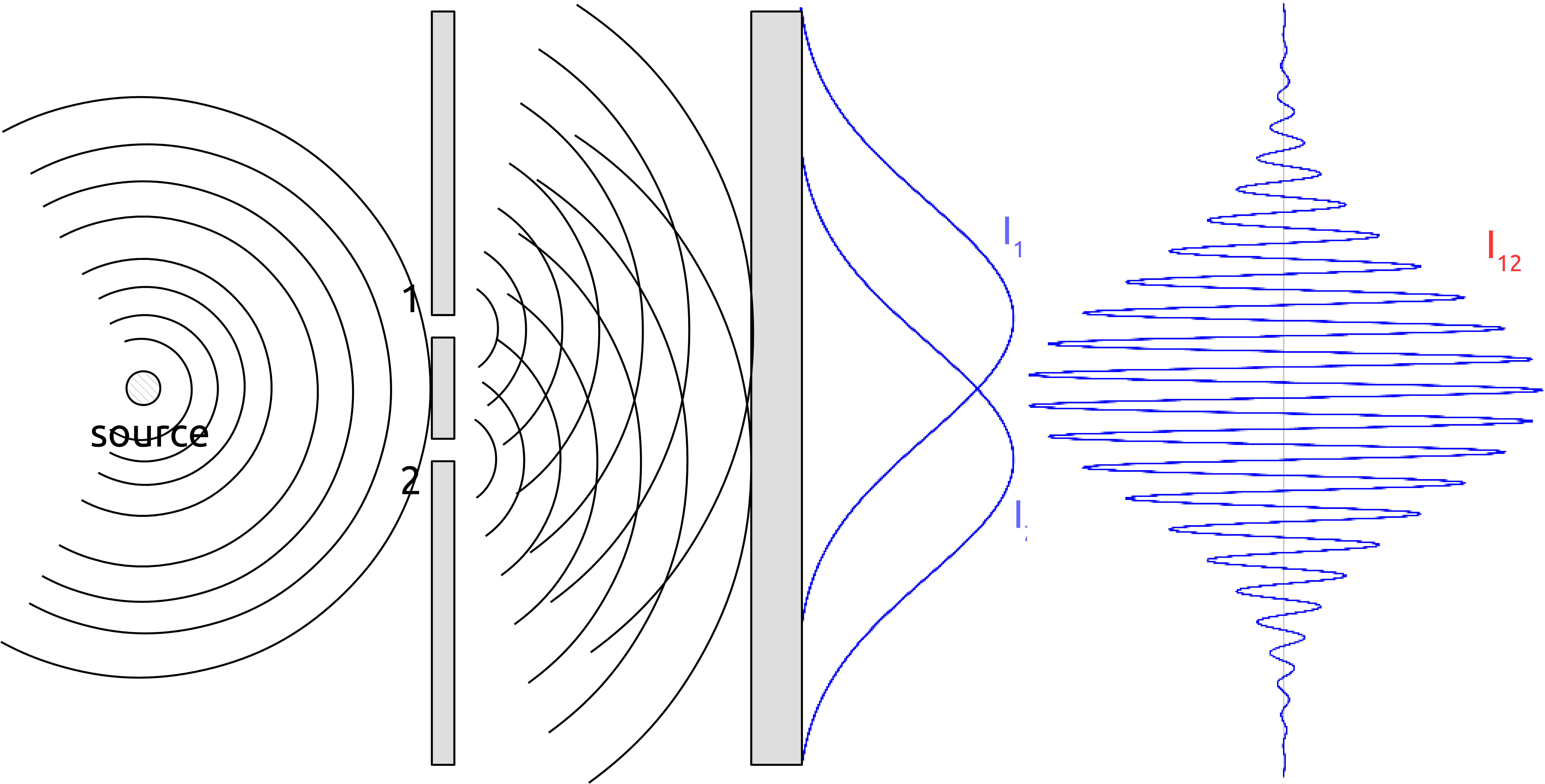 As we did for the bullets experiment, let's open both holes and see what becomes of the waves. One major difference that we see is that the waves can go through both holes at the same time. Once a wave has gone through both holes, it separates into two new waves, which propagate until they reach the stopping wall. Another major difference, compared to bullets, is that we can't "count" waves, this doesn't mean anything. So what do we do when the waves hit the stopping wall? Well instead of counting them, we are going to observe the intensity of the waves along the stopping wall. To understand this, imagine you are on the beach, looking at the waves coming at your feet. You'll notice that most of the waves that manage their way up to your feet have a very low intensity, that is, the height (or amplitude) of the wave is very small. However, if you stay at the same place and an earthquake strikes under the ocean, a tsunami will come and the amplitude of the waves will be much larger! Maybe 2, 3 or even 10 meters! Well this is what we are looking at on the stopping wall of our waves experiment: the amplitude of the waves that hit the wall. Are they waves with a large or small amplitude?

The answer to this question is the distribution $I_{12}$, which is the distribution of the amplitudes of the waves that hit the stopping wall. And now you wonder: why the hell is this so complicated!? Well because once a wave has gone through both holes, it splits in two new waves, and these two waves propagate together and interact one with another. Sometimes the crest of the first wave will meet the crest of the second one, and that will give an even larger crest, so that the resulting wave will be much more intense. On the contrary, sometimes the crest of the first wave will meet the trough of the second one, and they will cancel out, resulting in a flat wave. No intensity at all. When we combine all these wave interactions, we obtain this strange pattern, and we honestly don't need to understand exactly why it looks like that. Just remember that the waves interact one with another, and that it creates this strange pattern.

Things are much simpler when we close one hole. Let's close hole number 2, so that the wave goes through hole number 1. Unlike when both holes are open, here the wave does not split. After the first wall there's only one wave that propagates up to the stopping wall. No interaction, nothing. The distribution of the wave amplitude is $I_1$, and it makes sense: right in front of hole number 1, we have a maximum of amplitude because this is the shortest distance between the hole and the stopping wall. Therefore, it means that the wave has lost the least amount of energy. The farther we go from the center of the hole, the longer the distance traveled by the wave, the larger the amount of lost energy, hence the smaller intensity. Similarly, if we close hole number 1 and let the waves go through hole number 2, we observe the $I_2$ distribution.

Finally, it's worth noticing that contrary to bullets, the $I_{12}$ distribution, which is the distribution of waves amplitudes when both holes are open, is obviously NOT the sum of the $I_1$ and $I_2$ distributions.

An experiment with electrons 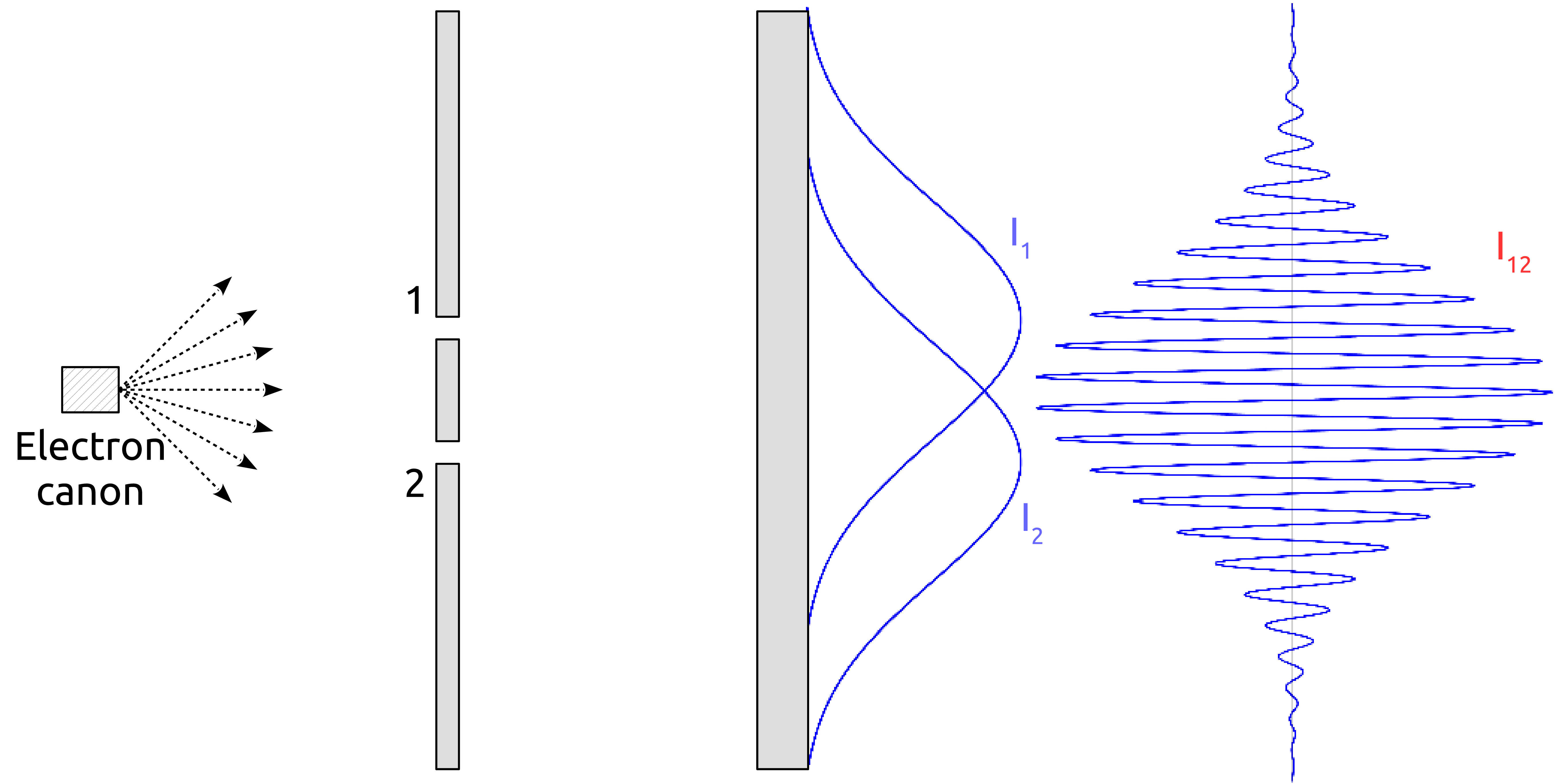 Well that's easy isn't it? Since we have the exact same results as the experiment with waves, then electrons are waves! We thought so, too. Unfortunately, there was something fishy... Let's put some 'wave detectors' on the stopping wall. These detectors emit a signal each time they see an incoming wave. If electrons are waves, then we should have two signals emitted by the detectors, since as we said, the initial wave is split in two after going through both holes. And this is where it starts to become strange: there's always only one signal, as if there was only one wave propagating, although both holes are opened. This doesn't make any sense!

Since Nature wants to trick us, let's try to trick Her in return. We are going to put our waves detectors next to each hole. If electrons are waves, then both detectors will emit a signal because waves are supposed to go through both holes. We do that and we perform the experiment once again, and the result is that there's always only one signal! The electrons are not going through both holes at the same time! In addition, at the end of our experiment with the detectors next to each hole, we observe the following distributions: 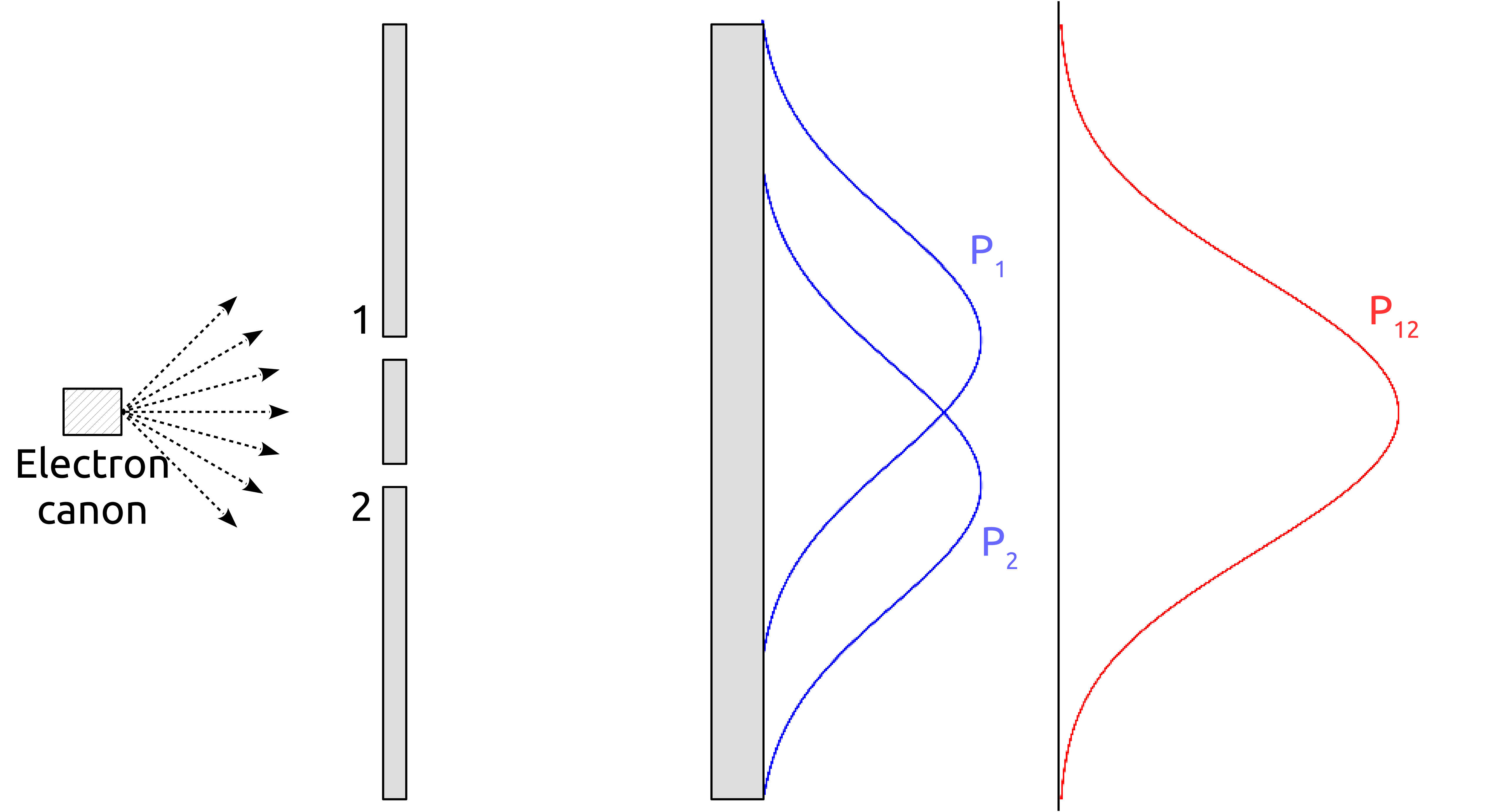 IT CHANGED!!! Electrons are now behaving exactly like bullets, whereas when we did not try to figure out which hole they were going through, they were behaving like waves. We wanted to trick Nature, but Nature has more than a few up Her sleeve!

At the end of the day, what is an electron? Is it more of a wave or a bullet? Well, provided we don't try to find out, it's both! It's a wave AND a bullet. When we decide to perform an experiment to check whether it's one or the other, then the electron chooses a side, bullet or wave, and stays this way. It's just as if it knew we were observing it, so it tossed a coin and chose to become either a wave or a bullet. This is called quantum superposition. It means that all quantum particules (atoms, electrons, photons, etc.) can be many things at the same time, until we decide to observe them. Once we do that, they become only one of these many things, and all the rest is lost. Forever.